Global News - ‘Turban Eh!’ event at U of A turns racist incident into something positive

The Sikh Students’ Association responded to racist posters with an event promoting education and awareness.

The group, along with the University of Alberta Students’ Union and the World Sikh Organization, hosted Turban Eh! on Tuesday at the U of A.

Last week, at least a dozen racist posters were put up around campus, displaying the image of a Sikh man in a turban with a profane headline and xenophobic message. 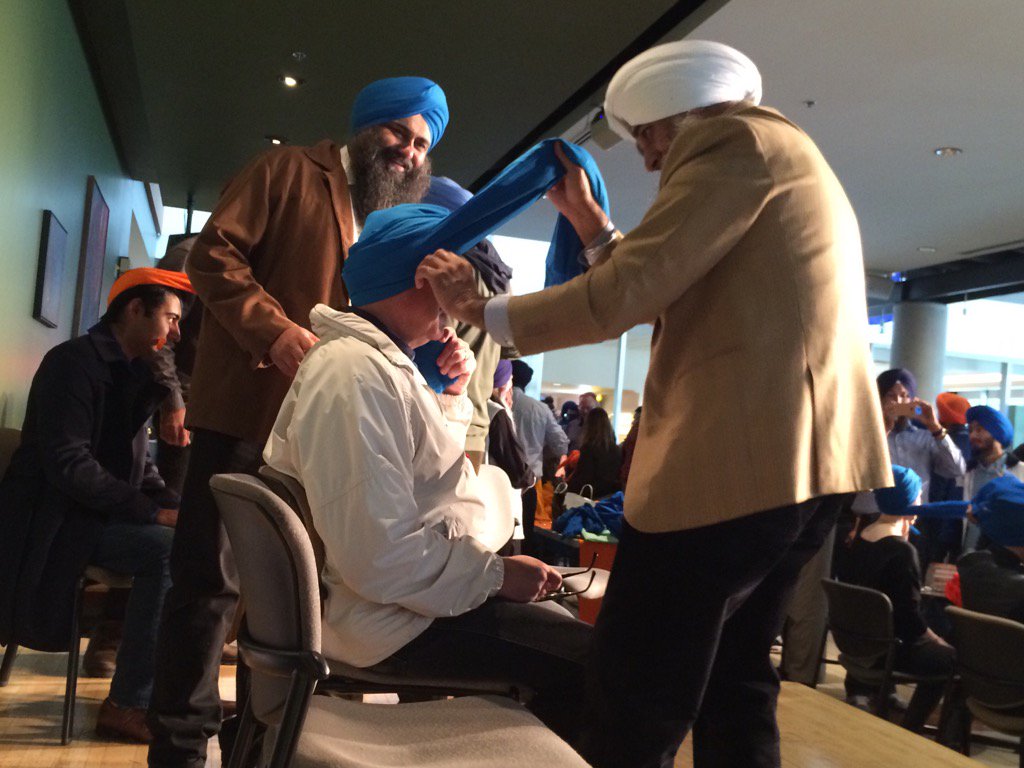 After the incident, the university responded, condemning the posters and taking them down. Positive versions of the posters began popping up all over campus and politicians of all orders of government posted messages supporting diversity and inclusiveness.

On Tuesday, volunteers tied turbans on Edmontonians and answered questions about the significance of the turban and what it means for Sikhs.

“It actually kind of felt like it was an honour in a sense to be able to sit there and learn,” Jesse Lipscombe, who had his own experience with racism that launched the Make It Awkward campaign, said.

Volunteers explained that originally, only elites were allowed to wear turbans and when Sikhism began, founder Guru Nanak gave a turban to everyone to represent equality.

“One big part of Sikhism is uplifting a lot of people and eliminating the caste system and other barriers in society. It was about uplifting women and other people who were persecuted and fighting injustice,” Arundeep Singh Sandhu, a spokesperson for the World Sikh Organization, said. “Part of it is it creates a very visible identity; it creates an obligation to act for Sikhs. People know who we are if we don’t act they know that we’re not living up to our own teachings.”

“If you’re going to look like a Sikh, act like a Sikh,” Lipscombe said. “That makes perfect sense to me.”

The event was also an opportunity for people to ask any questions they had about Sikhism.

“I didn’t know if women could wear them, which was neat to know,” Lipscombe said.

Given the campaign and viral hashtag, Lipscombe was also asked if the experience was, in any way, awkward.

“Sure, there’s a piece of awkward there because it shouldn’t have been awkward for me, on any other day, to ask a Sikh individual these questions, right?” he said. “I don’t know if I would have before this.”

U of A Students Union president Fahim Rahman had a turban tied.

“This is my first time having my turban tied,” he said. “I’m glad that I know a little bit more and I know who to contact if I have future questions.”

Ridley said when he heard about the posters, he really wanted to show support and solidarity with his fellow Edmontonians.

“The Sikh community is essential to the fabric of Edmonton,” he said.