WARNING: This story contains content which may be disturbing to some readers 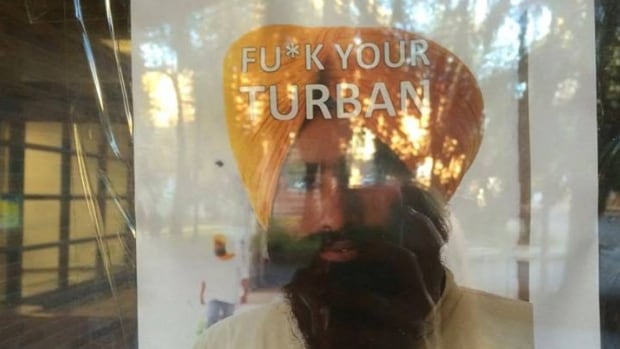 One of the xenophobic posters which appeared at the University of Alberta campus Monday. (Laura Porter/Facebook )
When Al Sahn saw the poster on his way to class, he couldn't help but rip it off the wall.

It pictured a turbaned man of the Sikh faith. Above the photograph, in bold letters, it read  "F---k your Turban ... If you're so obsessed with your third world culture go the f---k back to where you came from!"

The hashtags, "Non-Integrative" and "Invasion" were also on the poster.

Sahn found it taped to the door of the Rutherford Library on the University of Alberta campus.

It was just one of several racist posters discovered across the Edmonton campus on Monday.

Although the posters were quickly torn down, a photograph of one has gone viral on university forums, prompting outcry from students, faculty and politicians.

"Unfortunately, similar posters have also been found on other Canadian university campuses," Turpin said in a statement.

"The University of Alberta is a space that is open to all people and we take pride in the strength of our diverse community."

Administration is working with the U of A's Protective Services to find those responsible for the campaign, Turpin said.

Each one of the offending posters featured a man in a turban and the same references to Immigration Watch Canada, a Vancouver-based anti-immigration organization and website.

The group's website says it wants Canada to "drastically reduce immigration" and believes "it should never be a social engineering experiment that is conducted on Canada's mainstream population in order to make it a minority."

The organization garnered national backlash in April 2014  after it created a poster, decrying racial diversity in Brampton, Ont.

The poster, claiming to depict the "changing face of Brampton" showed a black and white historic photograph of white townspeople, followed by a modern photograph of Sikhs protesting. It encouraged residents to "make immigration work for the interest of Canadians again."

In August 2014, Immigration Watch published another flyer. It showed a Sikh man with a red line crossing out his face, and called on Canadians to "say no to the massive third world invasion of Canada".

Despite its history, Immigration Watch is not taking responsibility for the Edmonton posters.

Group spokesperson Dan Murray condemned the campaign and said the organization plans to take legal action against those responsible.

"I think it's bloody disrespectful and we would never put something like that out," said Murray.

"This person who did it obviously has a few problems and we don't think his problems are our problems, and he should have had the courage to put his own name on it and take responsibility for what he thinks instead of trying to blame it on us.

"We're not sure exactly who did this, but we have an idea, and we'll be talking to lawyers about it." 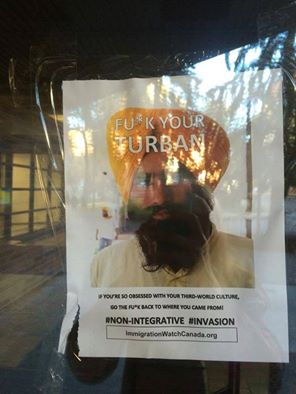 Arundeep Singh Sandhu, an Edmonton man who is Sikh and wears a turban, came across the poster online and decided to do something about it.

"It was shocking. It was upsetting," he said in an interview with CBC Radio's Edmonton AM on Tuesday.

"The first reaction was anger but I stopped to think about it and think about the best way to deal with something about this.

"Some people don't realize this, but the word Sikh means 'to learn'... so for me, I thought the best response would be education."

Sandhu is organizing a "turban tie-in" event on campus to educate the public about his faith. It will allow people who are not Sikh to wear the turban and learn more about Sikhism.

"They sit down in a chair and you have someone who can tie a turban," said Sandhu. "And while they're sitting there, in this sort of intimate environment, you can have a conversation, learn more about it and ask any questions you want."

"There is a silver lining in every cloud ... they have the freedom to express their views,  and I think the best response is to share our views and tell people who we are."

The World Sikh Organization (WSO) of Canada condemned the racist posters and described them as a "pathetic attempt at drawing the spotlight to deplorable views that have been rejected in Canada."

"These racist posters don't reflect the inclusiveness Canada is renowned for," said Tejinder Singh Sidhum, the WSO vice-president for Alberta

"And we know that the University of Alberta and the larger Edmonton community stand in solidarity with Sikh Canadians in saying that this type of messaging is not welcome."