First 2 of 65 families arrive, helped by the Manmeet Singh Bhullar Foundation and the World Sikh Organization. 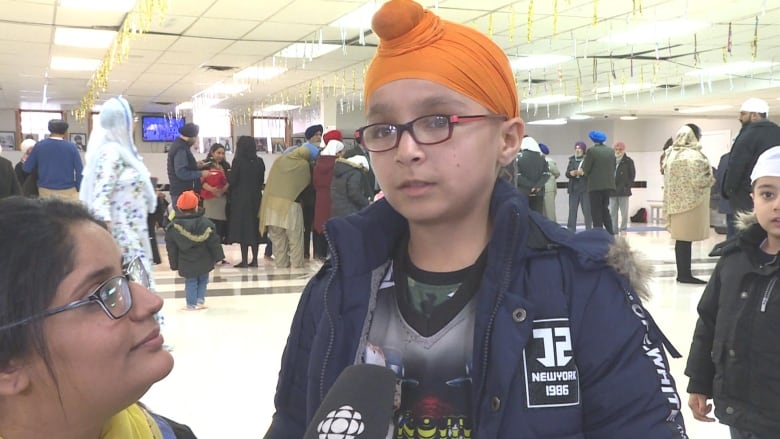 Members of the city's Sikh community were at the Calgary airport on Tuesday to welcome the first two families out of an eventual 65 who are coming to Canada as refugees from Afghanistan, where they faced religious persecution.

The Manmeet Singh Bhullar Foundation is spearheading the effort to help the Sikh and Hindu families get out of Afghanistan, with support from community members and the World Sikh Organization of Canada.

"Sikhs and Hindus have endured increasing religious persecution and today face a difficult if not unlivable situation in many parts of Afghanistan," the WSO said in a release.

"Prior to 1992, their population numbered over 200,000; however, due to persecution and discrimination, most have been forced to flee to other countries."

Organizers say the plan to bring the families to Canada stemmed from the work of former Alberta MLA Manmeet Singh Bhullar. He died in a highway accident in 2015.

The foundation in his name, with the support of the World Sikh Organization, has continued that work.

Speaking on behalf of the foundation, Bhullar's sister Tarjinder Bhullar says the other 63 privately-sponsored families will be coming to Canada in the weeks and months ahead.

"The government has helped us a tremendous deal, but it is private families that have said 'we want to step up, we want to sponsor a family, we will be responsible for them for that year of settling them and integrating them into Canadian life,'" she said.

Speaking through an interpreter, 10-year-old Joginder Singh said he's looking forward to getting a good education in Canada to make his parents proud. He said he's glad to be out of Afghanistan, where the Muslim majority tried to convert Sikhs like him to Islam.

Excited to go to school

"It feels really nice to be here," he said.

The families all come from the most troubled, poverty-stricken regions in Afghanistan, according to Bhullar.

Foundation volunteer Hamreet Baines, who has been helping the families as they wait in India for their turn to come to Canada, says it's a huge relief for them to get here.

"They were just happy to leave Afghanistan and that their life is saved. They're happy to practise their religion, out in the open," she said.

"They didn't have any human rights there. They weren't allowed to even leave their houses."